Lord Shiva is an important God in Hinduism, the one among the Trimurthis. Among the ‘Trimurthis’, Lord Shiva has the duty of destroying or ‘Samhara’. Shiva is believed as the supreme God and is also referred as consciousness as per Sakthisam.

Lord Shiva has many other names like Rudhra, Mahadeva, Parameswara and Neelakanda. Lord Shiva is often portrayed as immersed in deep meditation or as in the famous Natraja form(lord of Dance). His famous dance form is known as the ‘Thandava’.

In Sanskrit, the word ‘Shiva’ means Kind or ‘The pure one’. Lord Shiva is believed to have a third eye, which is believed to be in the middle of his forehead. He uses this third eye to burn desires to ashes. His appearance is also different compared to other Devas. He is often shown garlanded with a snake around his throat. ‘Tri soola’ or the Trident is his main weapon. A small drum named as ‘Damaru’ is always attatched to his Trident. Lord Shiva and all his attendants are believed to exist in Mount Kailasa which is in the Himalayan Hills.

Lord Shiva wears Cheetah's skin. He applies ' Bhasmam ' on his forehead and also wears half moon on his head. River Ganga is believed to exist in Shiva’s hair, which has a shell like structure. Thus he got the name ‘Gangadhara’. Its believed that the blue color of Shiva’s throat is because of the poison which he drank during the ‘Palazhimadhanam’. Thus he got the name ‘Neelakanda’. Devi Parvathi is the mistress of Lord Siva. Their combination is usually known as ‘Ardhanareeswara’,half man and half woman. Lord Siva can be easily pleased and easily angered. It's told that his anger is like the fire. He often Travels on Nandhikeswara.

The main offering to Lord shiva is the Dhara 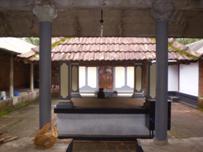