This temple has three Sreekovil, one is dedicated to Siva which is founded by Khara Maharshi and the other fonded by the priest as siva in Yoga. The third one is dedicated to Lord Maha Vishnu. Sub deities arer Sastha, Ganapathy, Naga, Devayakshi in this temple. It is very rare to see the SaptaMaathru, which locates here in the pillers.

The rarest temple which has two Mahadeva Prathishtas in two shrines and Mahavishnu in another shrine in one Nalambalam. Also the temple has three Dhwajas. The legend says Khara Maharshi had done the Prathishta as single Idol of Sree Mahadeva, giving the place the name Ottasekharamangalam-meaning place where single Siva exists. The divine power of the Idol was so high that even a bird couldnt fly over the Shrine. So after years,the Idol was divided into two-Thekkedam and Vadakkedam and the Thekkedam is the Moola Sthana. 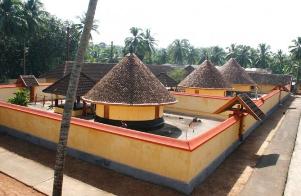 This is the one & first –3 flags- temple under Travancore Devassom.