Indilayappan Temple of valaya vadakku-kaipattoor is one of the oldest and most famous Indilayappan temples of kerala located in pathanamthitta district in a place named nariyapuram in vallicode village.

Seated in the lap of Mother Nature. The deity is in the form of a natural grown black rock having no cover over head. The deity has free access to national elements in its pure form, reverend as “appooppan” (the great old grandfather), lord indilayappan is the provider and protector of all living and non living things of the area. Hundreds of people throng every day in the temple to share their sorrows and joys with their “appooppan”.

The Indilayappan temple of Kaipattor- Vayalavadaku is located at Naryapuram in Pathanamthitta district of Kerala. This is one of the most famous Indilayappan temples in Kerala. The temple is more than 1500 year old. This beautifully built temple is situated in the foot hills of Sabarimala. This temple is famous for its well protected sacred grove, clear water ponds and ever green meadows. Here, nature in its undisturbed form blends with faith and belief. Lord Indilayappan the incarnation of Lord Siva and Lord Dharmasastha continue to bless devotees from generation to generation

Indilayappan temple of Valaya Vadakku-Kaipattoor is one of the oldest and most famous Indilayappan temples of Kerala located at Nariyapuram in Pathanamthitta district. The temple is the abode of Lord Indilayappan the incarnation of two divine powers of Lord Shiva and Lord Dharma Shastha .Situated in the back drop of scenic beauty and adorned by sacred grove, all weather clear water ponds and vast ever green meadow, the temple is an embodiment of serenity and peace. Seated in the lap of Mother Nature, the deity is in the form of a natural grown black rock. The deity has free access to sunlight ,air, rain,mist and dew. This is made possible by leaving the overhead portion of the Sreekovil open. Known as “Appooppan” to the people Lord Indilayappan is the provider and protector of all living and non living things. Hundreds of people share their sorrows and joys with their “Appooppan” everyday. His benevolent grace covers everything and everybody. It is said that many people have seen him as a tall, muscular, proud old man attired in saffron who has guided weary travellers during nights in yester years. Many people said to have witnessed the “Devapooja” a ritual conducted by super natural powers in the thickness of dark “amavasi” midnights.

History of the temple goes back beyond 1500 years. It is said that a poor Scheduled caste woman who went in the jungle to fetch fodder and firewood happened to sharpen her sickle on a projected natural grown black rock, blood oozed out from the rock indicating the divine presence. Astonished and alarmed the poor woman immediately brought the matter to the notice of village elders. Having heard about this, villagers from all walks of life gathered around the rock, cleared the jungle and worshiped the projected rock with wild flowers and cow milk. It is proved in the “devaprashanam” that the natural grown rock stood in the middle of a pond known as “Thodukulam”has godly powers , “devachaithanyam” of lord indilayappan, guarded by Ganapathi, Shasthavu ,Durga and MahaVishnu and protected by moorthi, yakshi, gandharvan, karimkalimoorthi, Brahmarakshas, Nagarajavu, Nagayakshi,Ghandakarna and Bhairava.

It is said that the great “vayalvanibham” (cattle and agrimela) presently held in Omalloor was once held in the Padayanical vayal the land of lord Indilayappan. During one of such melas one bull had gone berserk and had strayed into the Omalloor vayal. To the great astonishment of the on lookers, an old, muscular tall gentleman wearing traditional attire of farmers “a mundu and a thorthu “appeared from nowhere and tethered the estranged bull in Omalloor Vayal and declared that the Rakthakanda swami of Omalloor wishes to relocate the cattle mela in that land and then mysteriously disappeared. Since then, this cattle and agricultural mela is continued Omalloor known as Omalloor Vayal Vanibham. There are many such stories handed down from generation to generation continue to exist which are believed to the core by the people

As far as the written history goes, the temple was owned and worshiped by Namboothiries of Maramattath Illam. After that it was owned and worshiped by Namboothiries of Kuttiyatanippurath Illam of Vayalavadakku. During the year 1985 the ownership had been handed over to NSS Thaluk Union Pathanamthitta.The temple is owned and functioned under the administrative control of NSS Taluk Union Pathanamthitta .An Advisory Committee drawn from the nearest NSS Karayogams is monitoring the day today activities of temple. The temple which was constructed once upon a time had met with ruins. The present generation took over the renovation programme keeping all the sanctity of the temple intact. It is beautifully renovated with Vasthusasthra and temple construction arts. Presently plans have already been drawn to renovate the most reverend portion of the temple the Sanctum Sanctorum (Sreekovil). People of this area consider themselves as the luckiest among all other generations, since they could take part in the rare occasion of temple renovation programme. They whole heartedly support and participate in the programme .

The Temple conducts various rituals as a part of Temple culture,Temple art, traditions and beliefs. These are generally conducted on special occasions or once in a year to please various upadevathas. Some of them are as under:-

Noorum Palum This is the offering to please Nagaraja and Nagayakshi ,the Serpent God and Goddess. They are seated in the middle of the sacred groves of the temple.

Guruzi( The sacred sacrifice) This is the offering to please various Ugramoorthies ( fierce Gods) like Karimkali Moorthi. It is said that earlier sacrifices of animals were conducted and their blood was offered as an offering. However , now it is done only symbolically.

Panthirunazhi It is an offering to mark the prosperity of the land by cultivation of paddy .The offering is raw unpolished rice deliciously prepared in measured quantity and distributed among all people.

Niraputhari It is an offering wherein the matured kathir Is procured from the paddy field and offered to the Lord Indilayappan as a mark of gratitude for giving an excellent crop . The fresh paddy is processed and the cooked rice is offered along with fried mixed Vegetables particularly along with Uppumanga. The matured kathir is also taken home and preserved throughout the year.

Kalamezhuthi Pattu It is an important event related to temple art and Music . It is offered to Lord Dharma Shastha during Sabarimala Makaravilakku season. Beautiful images (known as kalams) of various Gods and Goddesses and events from epics are drawn. These are drawn by powdered ingredients made and mixed from natural colouring agents. No artificial colours are used .It is displayed on the fine smooth floor of the mandapam and lighted by serene Nilavilakku. Devotional songs composed and sung by trained singers accompanied by temple vadyams Conch(Shankh), chengila and Thimila are the specialty of the event. Art, music, light, traditions and beliefs are all mingled as one unit to make the show a breath taking event.

Rituals and traditions related to Sabarimala Temple Being Shastha himself and seated in the foothills of Sabarimala Lord Indilayappan temple is heavily influenced by the rituals of Sabarimala. The Mandala Pooja and Makaravilakku pilgrimage season of Sabarimala during the months of Vrischikam ,Dhanu and Makaram of Malayalam months are considered as sacred months for the temple . People keep vritham during these months ,abstain from Non- Vegetarian food and visit the temple every day morning and evening to offer prayers . The vritham is started by wearing Malas made of Thulasi stumps ,Sandalwood and the like by devotees under the guidance of Guruswami . Irumudi kettumurukku and Aazhi Pooja are conducted in the temple before proceeding to sabarimala pilgrimage. Saranam vili and Bhajsnas are also conducted during these sacred months.

Festivals of the temple are conducted with enthusiasm ,devotion and grace. On the 41st day of Mandalam Pooja( around 25th of December) ,the main festival of the temple is organized .It is marked with Para Vazhipadu, Jeevatha Ezhunnellippu. During night the Jeevitha Ezhunnellippu is accompanied by Theevetti ,Chamayavilakku and Chendamelam. The deity symbolically seated on Jeevitha carried by Nampoothiries are taken out as procession Various cultural shows are also organized.

Shivarathri festival is celebrated with great devotion. Seven days prior to Shivarathri , The holy Bhagavatha Sapthaham starts to conclude on Shivarathri day. Various cultural shows are organized on Shivarathi night.

Hindu Mahasammelanam :- It is organized on the 5th day of the holy Sapthaham. Famous Acharyas ,Religious heads and other well known people give discourses on various aspects of Sanadhana Dharma.

Janmashtami :-The birth of Lord Krishna is celebrated. Colourful procession is taken out on this day. The procession is accompanied by children attired as Gopikas and Krishna , various kalaroopams ,Chendamelam ,Kavadiyattam, Mayilattom etc. The procession is joined by various processions from adjoining areas and are assembled in the temple maithanam.Thereafter uriyadi competition is held . Finally prasadams are distributed 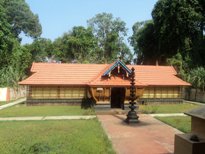