The uniqueness of this temple is there is no idol in this temple. The rare temples in kerala to visit. The principal deity is a called Parabrahmam (Cosmic Consciousness).

The Oachira Temple is an extremely ancient temple located in Oachira in Kollam district in the South Indian state of Kerala. This very ancient pilgrimage center is centered on the ParaBrahma temple (that is dedicated to the Para Brahman (or Param Brahman) or Ohmkaram, the Universal Consciousness), and covers thirty-six acres of land. it has no deity or idol but is dedicated to Parabrahma.

Ward and Conner, two British officials entrusted to survey Travancore in the beginning of 19th century, made their observations about Oachira in their report. In the report it was made clear that there was a very old and damaged pagoda on the eastern side of the Padanilam. It was also disclosed that there was a large reservoir at the center of the vast ground on which the temple stands, (which was now known as Kallukettuchira), and which is outside the temple compound today.

Apart from the spiritual side of Ochira temple, the most interesting concept of this temple is its acceptance of any one who is seeking shelter and help. Ochira stands out to be one and only example in this century to be a place for those who seeks God through service and open heart. The concept behind this temple is very simple, God exists every where, you seek them through service. Ochira teaches it's devotees to care for the helpless and diseased people. Gopuram, East Nada, West Nada, Ondikkavu, Ayyappa Temple, Mahalakshmi Temple and Ganapathi temple are the points of worship here

When it time of June month, "Ochirakali" is celebrated and "Panthrandu Vilakku" (12 lamps) festival is celebrated for 12 days in the month November - December. This festival is worth watching with agricultural trade fairs and cultural performances.

Ochirakkali is a mock fight enacted between groups of men dressed as warriors in the Padanilam. Martial performances are displayed between different groups from different 'Kara's(Regions) standing in knee-deep water, brandishing swords and shields,and splashing water every direction.

Vrischikotsavam or 'Panthrandu Villakku' is a 12 day carnival held from Malayalam calender month Vrichikam 1 to 12 (fall in November). The devotees even from far away places come and stay in the Padanilam in small huts called 'Kudil' irrespective of their social status, creating a one and only world of "human being" .

Erupethettam onam is celebrated every year in ochia on the 28 th day of the Onam festival with procession generally known as "Kaala kettu". Normally the day falls in September or October.Erupethettam onam is a procession of these Ochirakkala dummies made and brought to the Padanilam by different groups of people from all the sides of Ochira.

Unlike the other temple, the offering made in Ochira temple are very different. The most unique ones are the "Kayyum Kaalum", "Anna Danam", "Bhajanam Parkkal", Ettukandam Urilicha, Vedi Vazhipadu and "Uru Nercha". All these are based and related to the hindu and budhist myths and beliefs.

Kayyum Kaalum In both the Nadas, thes idols of hand and leg are provided as offering. These are offered for body healing of sick people.

Annadanam This is the most important offering in Ochira which is also supporting the social cause. Devotees can donate for this purpose. Annadanam is managed by the temple administration for the past 60 years. Poor and the helpless are fed daily with the fund collected from the Annadanam offerings.

Bhajanam Paarkkal This is another unique feature of Ochira temple offered as part of the famous 12 day Vrichikotsavam. Devotees come and stay in the padanilam in specially made huts. Those devotees who sacrifice these 12 long days with the minimum facilities makes a big difference. When they comes to this, there is no relegion, cast or other dividing factors - but only one Parabrahmam - the real truth.

Ettukandam Urilicha This is a spectacular seen for any one new to Ochira. It is a Procession held around two Aal tharas with decorated bulls and Nadaswaram and can be offered by any devotees.

Vedi Vazhipadu Dedicated firework with sound,this can be offered in the three locations within the temple premises.

Uru Nercha This is another unique ways in which devotees can make offering. Devotees bring in calf and donate to the temple and pray for healings.

Ochirakkaala (Bull)- the VIP of Ochira Ochirakkaala (Sacred Bull) is an icon of Ochira. The first thought about Ochira is symbolized by this animal which is a beautiful sight in the Padanilam. Well decorated bulls are considered to be sacred in this temple and is believed to be the vehicle for Parabrahmam.

Devotees can make donations to the bulls in both the Nadas. Also devotees can donate calves to the temple as an offering. Ettukandam Urilicha(Procession accompanied by the bulls and Nadaswaram), another offering in this temple is a wonderful sight to the pilgrims.

To reach this place, the nearest railway station is at Ochira, a few minutes drive from the temple. The nearest airport is Trivandrum International Airport, about 105 km from Kollam

The temple is situated in a massive 36 acres of land on the west side of National Highway 47. Arial view diagram will provide the major points inside the Padanilam. 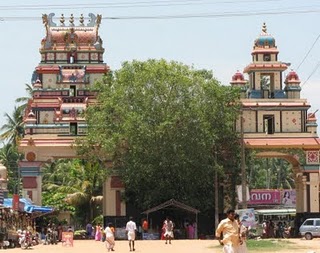 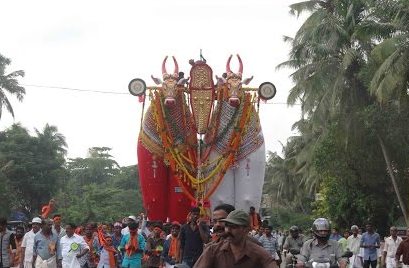