Goddess Sri Raja Rajeswari, (considered to be 'Jala Durga') is the main deity of this centuries old temple. Even though authentic details are not available about the age of the temple, it is considered as one of the 108 Durga temples made by Lord Parasurama in kerala. It is believed that the name Palarivattom Devi originated from " Palachuvattile Devi " (Devi underneath the 'Pala' tree).

In 1968, the 'Palarivattom Sri Raja Rajeswari N.S.S Karayogam' came into existence, and took over the charge of the dilapidated old temple. 'Ashtamangalya Prasna ' was conducted and, thus in 1984, under the auspices of the Karayogam and under the overall charge of Pukalakkatu Advocate P. Gopalakrishnan Menon, a temple reconstruction / rehabitation committee was constituted.

This Committee reconstructed and improved the old building to the present beautiful and impressive temple.

The new copper flag mast and the spacious ' Aana pandal ' were built in 1991 and 1996 respectively. Artistically decorated Srikovil, Thidappalli, Namaskara Mandapam, Naalambalam, Balikkalpura, Koothambalam, Sadhyaalayam and the temple pond, are the main attractions of this temple, where hundreds of devotees visit daily to offer their prayers. Apart from Goddess Sri Raja Rajeswari other deities in the temple complex are: Lord Ganesha, Lord Ayyappa, Lord Vishnu, Lord Shiva and Goddess Naga Yakshi. The rituals and the poojas of the temple are done by the priests from the Puliyannur Illam.

Situated in the Cochin corporation area 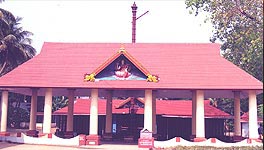