Changa Devi temple is situated on the south side of river Karamana near Vellanadu. It is a place blessed with happy combination of legend, faith and historical elements. Nowadays it has become a place of pilgrimage also. It is believed that goddess Kali’s presence is here for protection and welfare of the village. Goddess Kali’s smiling face and compassionate look supposed to be behind all the prosperity and welfare of the entire region.

Changa was a remote and underdeveloped countryside village long ago. People were mainly farmers rearing cattles. It was believed that Kali Devi was omnipresent in the village looking after them, their grievance and protecting them. In addition to this, Ganapathy, Dharmasastha, Siva, Nagar and lots of other deities had been worshipped by them. Their faith in the Kali Devi increases day by day. They had been talking experiences of relief and fortunes to their life. They passed on the belief on Devi Kali to the next generation. They believed firmly that Kali Devi is with them. The stories and experiences related to Kali Devi spread to the neighbouring villages. The neighbouring people began to come to Changa Devi temple to offer their praise and receive the blessings.

The charisma of Devi Kali became more powerful, more spreading and more firm. At this stage, a total change in the style of the temple architect was done with the advice of the astrologers and thanthri, the devotees decided to expand the temple and its premises making it to the need of the days. They did it by giving proper places for sub deities in the temple. As a result of all these innovations people’s faith grew day by day, the stories of their incredible experiences spread to the neighbouring places. The people from distant places began to visit the temple making it more and more famous. In short the place developed to a place of pilgrimage as we see it today. ‘Vara’ is the offering (Nivedya) here. Brahmin form of worship is followed here.

This temple is similar to Vellayani Bhadrakali Temple, but tender coconut is offered in the place of toddy for madhupooja.

Kumbam Revathy festival, Digbali Ezhunallippu are special event here. Changa Sree Bhadrakali utsavu, the well known temple festival commences on Revathy day in 'Kumbha' month every year (in between February last and march 1st). The festival is a high spirited in the piety heart of the natives who become a part and parcel of the epoch making celebrations from the beginning to the end. The pious soul of the village people will be merged into the rhythmic moments of the ten days. The festival days are colourful and enchanting with a series of ritually conducted functions as Lalithasahasranamarchana for Devi, Iswaryapooja for the welfare and enrichment of the village and Saraswathy Ashtottharapooja is for the prospects and welfare of the education of the children. They are conducted by devotees, house wives, students respectively.

Falling Kodimaram
It is the contribution of devotees to the Devi. A devotee gang set out from the temple with traditional music including chenda and cut the areca tree and come back in procession and decorate the kodimaram.

Thrukkodiyettu (Hoisting of the traditional flag)
Thrukkodi is brought to the temple with a vilakku kettu from the devoted man and hoist the holy flag at the accurate time fixed very early(muhurtham). It is under the leadership of the temple thantri and melshanthi. Thus ten days and nights Changa lits the lamp of a devout atmosphere. Along with this Ushapooja, chuttuvilakku deeparadhana and pushpabhishekam are done.

Aiswarya Pooja: All the house wives offer Lakshmi pooja to get the blessings of holy ‘Lekshmi’ form of 'Changayillamma' in the supervision of 'Melshanthi' of the temple. It is conducted in the first day of every Malayalam month.

Saraswathi Ashtothara Pooja:By chanting saraswathi ‘ashtothara mantra’ , students praise the 'Changayillamma' in the form of Goddess Saraswathi to get blessings for their studies. It is conducted three times an year.

Lalitha Sahasra Namarchana: By chanting ‘Lalitha Sahasranamam’, devotees offer poojas with red flowers and Kunkumam, to get the blessings fro Changayillamma in the form of “Lalithaaambika”. 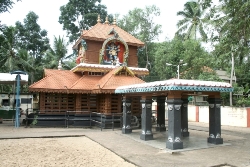