The pilgrimage begins in the month of November and ends in January. The temple attracts pilgrims not only from the southern states of India, but also from other parts of the country and abroad.

The shrine gets thronged with devotees especially during the main pilgrim season from November to January.

Mandalapooja(Nov.17th)and Makaravilakku(Jan.14th)are the two main events of the pilgrim season. The temple stays closed during the rest of the year except for the first five days of every Malayalam month and during Vishu (April).

Certain customs are to be strictly observed if one has to undertake a pilgrimage to Sabarimala. A pilgrim attending the Mandalapooja should observe austerities for 41 days. During this period, the pilgrim should abstain himself from non- vegetarian habits and cardinal pleasures.

Pilgrims set out in groups under a leader, and each carry a cloth bundle called Irumudi kettu containing traditional offerings. Unlike certain Hindu temples, Sabarimala temple has no restrictions of caste or creed. The temple is open to males of all age groups and to women who have either passed their fertility age and those before reaching the stage of puberty.

Sabarimala is a renowned pilgrim centre atop the rugged hills of the Western Ghats. This holy shrine is dedicated to Lord Ayyappa.

The sanctum sanctorum nestles 914 m above sea level, amidst the virgin forest wilderness of the Western Ghats.The main pilgrimage is undertaken between November and January. Regardless of caste, creed, colour, they wear black dhotis and carry on their heads, bundles containing traditional offerings like coconut filled with ghee, camphor and rice.

The layout of the Ayyappa temple is believed to have originated from the specific instructions of the Lord himself, who wanted Malikappurathamma, on his left a few yards from Sannidhanam, and his trusted lieutenants Vavur and Kadutha to be positioned as his guards at the foot of the holy 18 steps. The pilgrims worship in this place also. This exemplifies the unique feature of the temple. The temple is open to all faiths. The divine qualities like equality, fraternity, tolerance, humanity etc.. are shining well in the pilgrims.

Ayyappa cult gives much importance for the secularism and communal harmony and has turn out to be a model for the whole world. Another significant aspect of the pilgrimage is that all the pilgrims whether rich or poor, learned or illiterate holding position or not master or servant are all equal before LORD AYYAPPA and all address each other as AYYAPPA.

The pilgrims on their sojourn to Sabarimala worship at Erumeli Sree Dharma Sastha Temple and conduct "Petta Thullal". They also worship in the mosque at Erumeli as a part of their pilgrimage.

According to legend, the temple of Sabarimala and the deity of Ayyappa have always been regarded as the Pandalam Raja's very own. So permission from the King has to be attained before proceeding to the temple. To make it easy for pilgrims to obtain the necessary permission, a representative of the king sits with all the royal insignia, on a raised platform at the base of the Neelimala Hill. The pilgrims offer a token amount (not necessary) to the royal representative, and receive vibhuti from him.

This marks the beginning of the steepest climb of the pilgrimage, the 3 km trek up the majestic Neelimala Hill, atop which sits Lord Ayyappa in all his glory. The pilgrims wind their way up the difficult trail in an unending stream, the hill reverberating with the constant chanting of thousands.

At the first sight of the Patinettampadi, the holy eighteen steps, a full throated cry goes up from the devotees, "Swamiye Saranam Ayyappa!" It is the realisation of a mission.

Homakunda: There used to be a large homakunda in front of the shrine, which burned constantly, fed by the coconut shells thrown by the devotees, after offering the ghee. As the coconut shells gets consumed by the fire, the sins of the devotees are believed to be cleansed. Due to the growing crowds in the temple, the homakunda has now been shifted to a location below the temple.

Bhasma Kulam: About a 100 metres away is the shrine of Malikappurathamma. En route to the shrine is the temple tank, Bhasma Kulam, in which hundreds of devotees take a holy bath in memory of the tapaswini Sabari who entered a fire to end her mortal life. It is after her that the peak is named Sabarimala.On account of the number of people who bathe in the tank, the water is frequently drained out and refilled with fresh water.

Malikappurathamma: Situated on a small hillock, the Malikappurathamma temple houses the shrines of the Devi and Kaduthaswamy. Devotees also worship a trident and lamp here, and offer coconuts. The coconuts are not broken, however, but are just rolled on the ground .

To the left of this temple are the shrines of the snake god and goddess, Nagaraja and Nagayakshi. Here, tribals beat on drums, play stringed instruments and sing sarppa pattu to protect devotees and their progeny from the harmful effects of snakebites.

Shrines of Kaduthaswamy and Karuppaswamy: At the foot of the Patinettampadi are the two shrines of Kaduthaswamy and Karuppaswamy, who stand like dwarapalakas or guardians of the holy steps, to ensure that they are not polluted by those who tread on them without fulfilling the rigid austerities required of them. They are also believed to protect the devotees from the evil spirits of the forests.

According to legend, Kadutha was a great warrior who helped the Pandalam king defeat the armies of Udayanan and other enemies. When the king came to Sabarimalai to reconstruct the temple, Kadutha came with him to protect him. Ultimately, he became so attached to Ayyappa that he decided to spend the rest of his days with his Lord.

Also near the Patinettampadi is the shrine of the Muslim Vavurswami. While there are several accounts of identity of Vavur, it is generally believed that he was a warrior who was defeated and subdued by Ayyappa, and later became a close associate. It is believed that Lord Ayyappa himself instructed the Pandalam king to build a mosque for Vavur at Erumeli and a shrine at Sabarimalai.

Renovations Done: Golden 18 Steps: The original granite steps were badly damaged due to continuous breaking of coconuts on the steps by pilgrims climbing the steps. The Devasom Board with the approval of Lord Ayyappan through a devaprasanam, covered the steps with panchaloka. The work was completed by 15th November 1985. Later on these steps were covered with gold.

Pilgrimage to Sabarimala begins from the 1st of Vrichikam, a Malayalam month coming in the middle of November (probably between 14 and 17). The most important day for Ayyappan is Makarasankranti Day, which is the 1st of Makara (a month of the Malayalam calendar). This day will fall between January 14 and 16.

On Makarasankranti every year without fail, miraculous events occur. Firstly as the jewels (Thiruvaabaranam) of the Lord are transported from the Old Pandalam Palace to Sabarimala, a Krishnaparanth (holy Garuda - an eagle - the vehicle of Lord Vishnu), circles above the precious jewels (in fact guarding them), like a protector. This rare eagle is rarely seen in the midst of people for a long period of time, yet the auspicious bird follows the Thiruvaabaranam procession, finally circling above Sannidhanam at Sabarimala nine times as it pays its respects to Lord Ayyappan. During this time, there is not a single star in the sky except for a special Nakshatram. As the beautiful jewels are placed on the golden body of the Lord within the temple, the several hundred thousand devotees outside, crammed into any available free space, chant "Swamiye Saranam Ayyappa". When the jewels are finally all adorned on the Lord, the Nakshatram in the sky miraculously disappears. Within moments after the Lord being adorned with the Thiruvabaranam, an effulgence (Divya Jyoti) appears in the opposite hills of Shabarimala, shining 3 times. This hill is called Ponnambalamedu.

During Makaravilakku season, the temple opening is at 4 :00 A M and closing at 11:00 PM. So some of the pooja timings will shift accordingly. Essentially, this is the trend of events

The easiest route is via Chalakkayam, by which one can reach the banks of the river Pamba by vehicle. Pamba is the main halting point on the way to Sabarimala. From here one has to trek 4 to 5 kms to reach the temple. 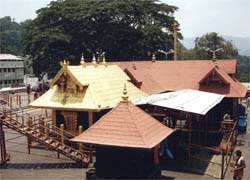